From the beginning, this recipe did not instil much faith that the result would measure up to our usual household guacamole.

For one thing, the ingredients called for a paltry teaspoon of garlic, which in my book, is far too passive for my taste.  The jalapeno it called for would have certainly lent some flavour, but not like the warm, slow burn of my usual red pepper flakes.  And then, the recipe asked for a tremendous amount of sour cream.  Not on the side, but IN the guacamole.  WTF?

Nonetheless, despite my concern, I followed the recipe verbatim.  The result was visually indistinguishable from a St. Patrick's Day milkshake, a nauseating pastel green reminiscent of hospital paint jobs.

The guacamole was so unappetizing, I consciously put away the camera, so as to spare the internet of its undelightfulness.

And somehow, despite the jalapeno, the guacamole even managed to be bland.  How?

Moreover, the blender was absolutely the wrong tool to get the consistency I seek; humble fork, I will never again abandon you in my guacamole-making.

The Verdict is an emphatic FAIL for Breville's guacamole recipe.

The Score for Breville Instruction Manual: Since there can be no more than two fails among the six attempted recipes for a book to receive a passing grade, this recipe book is wasting no time in nearing the precarious edge of the give-away bin.

Can it pull itself together to deliver three more hits?  Or, at least avoid failing more than once more?  Stay tuned to find out!
Posted by Karla at 2:19 am 5 comments:

The first recipe on the chopping block was one for a butternut squash soup, which sounded promising.  There's nothing like a tasty, lightly-spiced blended soup on a chilly winter afternoon! 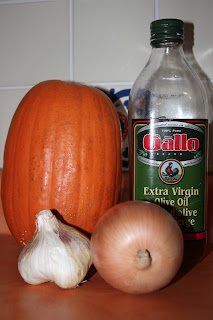 I was also pleased to have a means to use up a random pumpkin that had wandered into my house.  It had been sitting in the fruit bowl awhile, glaring at me accusingly for my general cluelessness about how to cook it.  Pumpkin soup sounds just as delicious as squash, and no doubt they cook similarly enough, so into the soup you go, judgey-pumpkin!

I admit, however, that the rather sparse list of ingredients quelled my enthusiasm.  Where are the spices?  There's only so much that can be accomplished by a post-cooking pepper and salting.  But nonetheless, we are judging the recipe on its own merits, and I've already used up my one permissible modification.  So I proceed as is written, taking comfort in my kids' lack of objection to bland food. 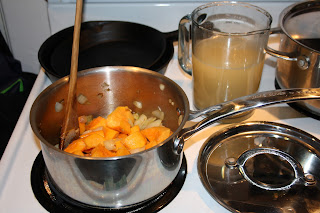 The instructions were straightforward -- saute the onions & garlic until fragrant, add the pumpkin until soft, add the stock until boiling, and then blend.  Voila, bone-warming soup!  I also added a tablespoon full of heavy cream to get that cool effect you see in high end restaurants.  ;-)  (Yes, I watch the cooking channel too much.)

As suspected, the result was a bit bland.  Some dried chili flakes woke up my bowl, but everyone else seemed happy with a bit of salt and pepper. 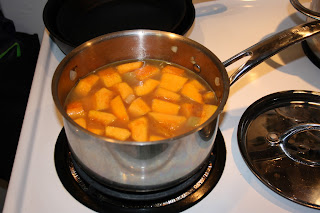 I also surmised that the dish in no way suffered from the pumpkin substitution -- if anything, the pumpkin supplied more flavour than the suggested squash.  In the future, I might even try roasting the squash beforehand, and maybe monkeying around with my spice rack.  Cumin makes everything better.

The Verdict:  While not a "wow!" recipe, the overall ease, versatility, and edibility of this dish earns it a passing grade.  I look forward to improving it with my own spin in future iterations. 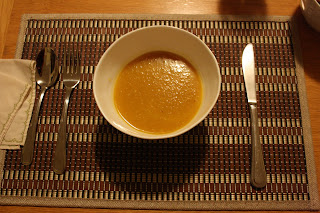 The Score for Breville Instruction Manual:  One success of one attempt so far, with a maximum of six possible recipes to try.  Once again, the cookbook requires four passes to be kept -- anything less, and to the give-away pile it goes!  (Or in this case, the filing cabinet with the rest of the household manuals....)

The next recipe will be a guacamole -- will it be a success?  Stay tuned to find out!
Posted by Karla at 5:20 pm No comments: 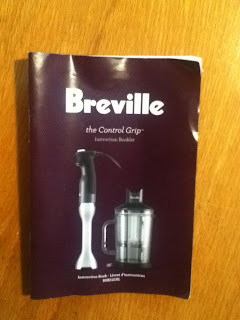 The reason this cookbook looks like a product manual is because it *is* one.  When I recently upgraded my hand blender, I noticed that the new manual included a number of recipes.  In turn, I was left with a dilemma -- do I store this booklet with all my other product manuals, or alongside the cookbooks?  Let us decide with a test of the recipes!

Hence, the book was amid the Sudden Death Cookbook cadre.  It was chosen randomly via random-number ranking.  As before, the individual recipes are chosen according to systematic random sampling.

The six recipes that were randomly selected are as follows:
I'll admit that at this point, things don't look too promising for the Breville cookbook, insofar as most of these items I have already made using recipes I like just fine.  My suspicion is that the recipes themselves won't be especially different from what I'd done before, but that the methods and tools will be new.

Is this book peddling redundancy, or will it teach this old dog new tricks?  Stay tuned to find out!
Posted by Karla at 7:15 pm No comments:

I approached this recipe with some trepidation, though, on the grounds that this Prairie girl often overcooks fish.  As in, BRUTALLY overcooks it.  And having married a West Coast fish connoisseur, the pressure is definitely on.

The next issue to contend with is the lack of ocean perch nearby.  I asked the guy at the fish counter for his input on a good substitute, and he suggested I use snapper.

So, below are our ingredients, with snapper. 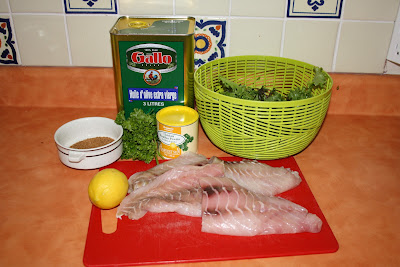 This recipe has two parts: the fish and the salad dressing.  On the upside, the instructions were precise, and helped me avoid overcooking the fish.

On the downside, the salad dressing was totally overlooked in the recipe.  Following the directions exactly, I was left with a newly-cooked, rapidly-cooling fish and yet-unmade dressing.  Even then, the result was somewhat underseasoned. 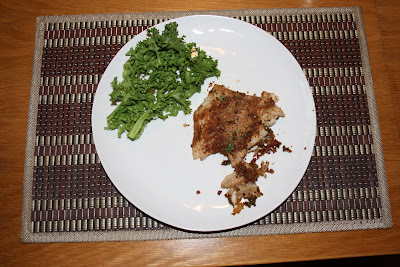 The end result was good, if somewhat unspectacular.  Everyone ate and enjoyed the dish, and adding salt and pepper at the table corrected the underseasoning adequately.  And thanks to the recipe, I even managed to cook the fish perfectly!

The Verdict:  This recipe needs more spices, and I made a note that the dressing needs to be made first.  Otherwise, however, the result was yummy and easy, and I would make this again.  Pass!
The FINAL Score for Healthy Winter Warmers:  With four successes out of six recipes, Healthy Winter Warmers PASSES the test!  In all of its pen-marked, oil-stained glory, this book shall rightfully claim its place upon the cookbook shelf.  Good show, HWW!

So which cookbook will be tested next?  And which recipes will be put to the test?  Stay tuned to find out!
Posted by Karla at 12:28 am No comments:

Hoisin?  Lamb?  Yes please!  And while I'm not usually excited about eating bean sprouts (having read one conspiracy theory too many about them), I was nonetheless eager to give this recipe a go. 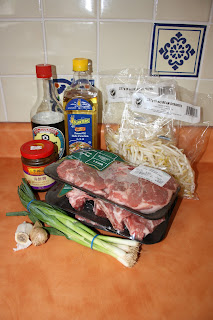 Once again, the recipe called for specific brand names of products that aren't available in Canada, so I substituted as necessary.  Nonetheless, I doubt that even using the original brand names could have saved this dish from becoming the drippy, salty, fatty mess it became. 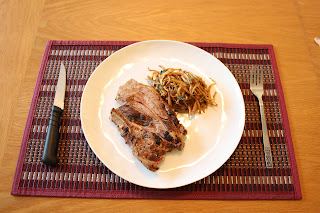 It was eaten nonetheless, but not with much enthusiasm.  This is a recipe I will definitely not be aiming to make again.

The Verdict:  This slimy waste of a good piece of lamb not only fails, it is Healthy Winter Warmer's most spectacular failure yet!

The Score for Healthy Winter Warmers:  Having now failed its second recipe, the score is three passes out of five.  Given that only one more failure will put the book into the give-away pile, the final recipe needs to be a success for HWW to be kept.  The suspense mounts!

The final, deciding recipe is for ocean perch, which I already know I'll need to substitute with snapper.  Not an auspicious start... we shall see what happens!

The fate of the book rests with that one recipe.  Stay tuned to find out how it went!
Posted by Karla at 7:32 pm 1 comment:
Older Posts Home
Subscribe to: Posts (Atom) 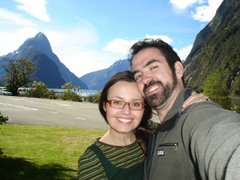 This is a Flickr badge showing public photos from karla_helgason. Make your own badge here.